For celebrating festivities or a moment of wishing good fortune and be superstitious, we have a tradition in Japan to use crafts and wear things like Kimono, which certain patterns so called Kisshō-Monyō (吉祥文様) – auspicious omens motives are applied. Beginning of new year is one of such moments.

There are several motives inspired by living creatures, such as fishes, animals, birds, plants, flowers and fruits, or tools used in a festivities. Living creatures such as dragon, phenix, crane or pine, bamboo, plum and more, often symbolize long lives, good harvest, blessing of rains, eternal love. These pattens are used as a motif of porcelains, lacquer wears or clothes (becomes kimono and obi). 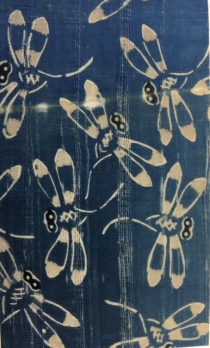 It is unfortunate that the custom has been disappearing and it is not at least something we proactively enjoy in our lives.  We only see it in the formalized traditional events without paying too much attentions.

There are many kinds of particular patterns used for celebrating festivities but I would like to pick up a pattern called Hōrai-mon (蓬莱文) this time.

The concept of Hōraisan(蓬莱山) came from China. From 2500 years ago, people believed that there is a utopia island in the eastern see of China. Hōrai mountain is on the island where a legendary wizard lives who is no aging nor death. Hōrai mountain was also believed as high so to extend to the heaven. At the bottom of the mountain, there is a river where dragons live. On the top of the mountain, phenix that can climb to the heaven lives by eating peaches and peers. 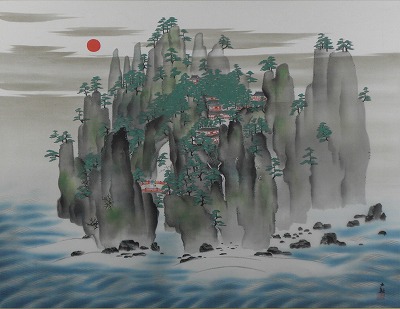 Interestingly, at the era of the First Emperor of the Qin dynasty (秦始皇帝, BC259~), Hōraisan –  a utopia island was believed to be located where Japan is. The record said that the First Emperor of the Qin sent people to the island in far east to investigate the Utopia and there are more than 10 places that the Qin’s messengers visited in Japan from the north to the south.

Hōraisan that symbolize immortality evolved to be one of auspicious omens motives. Today we can find Hōraisan pattern in crafts, architectures, garden, paintings and fairly tales.

Hōraisan-mon consists pine trees, cranes, turtles and plum blossoms – those are all considered as auspicious. Hōrai mountain is built on the carapace of a turtle. it is therefore, even if one tries to capture the Utopia, it runs away quickly so that one can never be able to acquire it.

In the centre pond of Echigo-Tsumari Satoyama Museum of Contemporary Art / KINARE, a huge mountain was exhibited till September 27, 2015.

This mountain is the artwork, Penglai / Hōrai, by Cai Guo-Qiang (蔡國強),  an internationally acclaimed Chinese comtemporary artist. You may know him as a Creative director for the opening and closing ceremony of Beijing Olympics in 2008.

The theme of this dynamic installation is, as you can guess from the title of the artwork – Penglai/Hōrai, the legendary utopia island.

It is only a month from now to unveil the impressive solo exhibition “Cai Guo-Qiang : Penglai/Horai”.

Cali expressed humour and ironies in this installation by responding the recent source of tension around ‘islands’ among countries in East Asia. From the front, the island is covered by rich greenery trees and thousands of straw-made birds and objects are laid around the island. But going around the back,  one realizes that the island is just like a standing signboard.

People dream of a Utopia. It is the same now as of old.  But if we are tenacious in our pursuit of capturing it, we will only get lost. Remember! a Utopia is on the carapace of a turtle! It just agilely escape and you may lose even a illusion of Utopia completely from your mind.