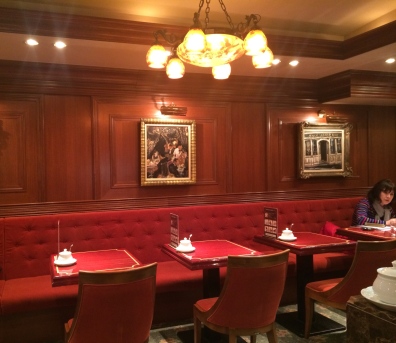 American coffee chains as Starbucks and Tally’s, Italian as Illy and Segafredo and Japanese as Doutor. There are thousands of coffee shops at every corner of both urban and rural area in Japan. Japanese traditionally drink tea, but Japanese are now the world’s fourth-biggest coffee consumers (after the U.S., Brazil and Germany), drinking 446,392 tons of the stuff in 2013.

Today, coffee is available in a variety of forms in Japan, from canned coffee served hot and cold by vending machine to coffee shops of both chains and independent. The growth of coffee consumption was driven by the kissaten, independent coffee shops, which evolved as Japan started to urbanize at the end of the 19th century. 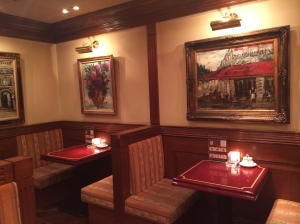 Kissaten is used for a variety of purposes. People are there for business meetings, killing a time before the next appointment, dates, reading a book, studying, etc. It could be an oasis to get out of the obligations of daily life.

Classical wooden table and velvety chairs. Renoir like impressionism paintings are hanging on the wall. Background music is often classical one. All these elements create really a cozy and relaxed atmosphere. Barista is making a coffee from a small vacuum coffee maker by cup by cup.  Coffee is served by a ‘real’ cup & saucer instead of a paper cup or a mug. A waiter wearing a white shirt and black vest in a butler like behavior politely serves a coffee. The process of taking an order, making a coffee and serving a cup of coffee are almost like a ritual. It seems time goes by slowly here. 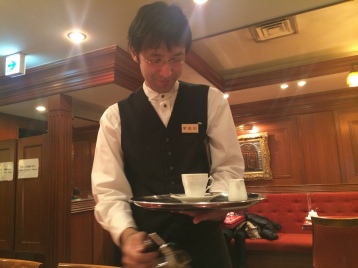 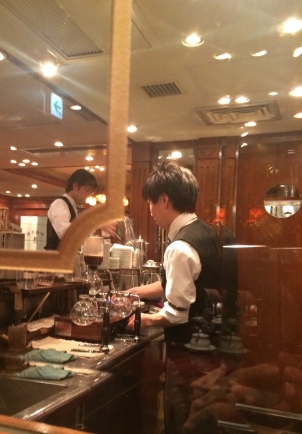 There were nearly 155,000 such shops in 1985, but went down to about 70,000 now. The young people go to Starbucks or similar kinds as they take a cup of coffee either on the go or with their computers and smartphones. Modern coffee shop with Free WIFI connection may be suitable for such consumers.

I am writing this at a cozy coffee shop, Shu (珈琲茶館集) on Omotesando street. I noticed that some foreign tourists entered into this coffee shop. Old fashion coffee shops may be appealing to new type of consumer segments. I hope kissaten finds the way to survive another 10 years. 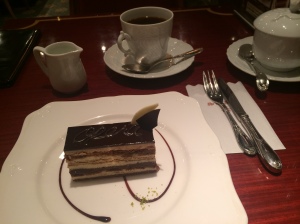